This review was published somewhere, but I don't recall where.  I've reviewed Thomas King's more recent book, The Truth About Stories, here (where I get to repeat my favorite Thomas King lines) and here. 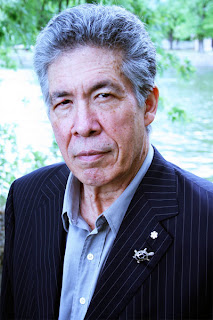 “You know what’s wrong with this world?” says the famous Native American artist who returns to his home town and paints a church to blend into the landscape so completely that it becomes invisible. “Nobody has a sense of humour.” (That’s how they spell “humor” in Canada, which is where author Thomas King lives.) Another character has already decided that this is the same thing that’s wrong with white people, and with Indians. But it’s certainly not a problem for Thomas King, a Native author of Cherokee and Greek descent. He ambushes you with humor that hits you twice—first when you laugh out loud, and then when you realize it’s terribly true.

Thomas King is the author of two previous novels (Medicine River is also a gently funny TV movie that’s worth renting; and Green Grass, Running Water), numerous short stories, and some sharply funny poems concerning the trickster Coyote. He’s also a photographer who made a series of portraits of Native writers wearing Lone Ranger masks. There’s a little of all those kinds of humor in this book.

Truth is a small railroad town in Montana and Bright Water is the Indian reserve just across a river in Canada. This contemporary story starts with a mystery involving a phantom woman leaping into that river and leaving behind a small skull, and meanders through these two communities and the interweaving lives of several characters whose lives started here and sometimes circled back, until it ends at the river again.
The voice telling the story belongs to a fifteen year old boy whose name is spoken exactly once, by someone who is less than reliable. (It may or may not be Tecumseh.) The boy and all the characters are Native Indian (as they say in Canada), except perhaps his dog Soldier, a major character. Their tribes aren’t mentioned either. But everything else—the voices, memories, characters, the buildings, and the landscape dancing in fog—are definite and alive.

As these characters (the boy’s best friend, his separated parents, his footloose aunt, his grandmother who he says isn’t a witch but seems to have acted like one, the returned artist, and a woman who is convinced that Marilyn Monroe was an Indian) live their daily lives, they expose their weaknesses and deploy their defenses of observation, desire and creativity. They also present us with more mysteries. The first one is solved, but some others should keep reading groups talking for hours. Even some of the jokes are time bombs that don’t go off until you think about them later.

The boy who leads us through this (not always understanding the significance of what he describes) is a truly made and admirable character, with the dreams, survival instincts, and practical literalism about the adult world of a believable rural small town teenager. His Native identity is never asserted but never doubted, it’s just part of his life. For example, Tecumseh (if that’s really his name) feels a relationship with the buffalo that wind their way through the story in different forms, and he is also interested in trying out the Internet, and someday visiting the West Edmonton Mall.

The author is able to say quite a bit about Native people in today’s world without hitting us over the head with either a stark version of the truth or our ignorance. But we absorb it, from the setting, the stories, and the characters and their sometimes biting wit.

Thomas King has become a master of novel narrative, which he enriches with suggestions of Native history, myth and traditional forms of storytelling. This is an easy book to read and a hard one to leave. For all the crosscurrents of humor, heroism, tragedy and evil, it flows with the ingenuity of the human heart applied to the complexities of everyday life. This is the most impressive story the author tells as well as exemplifies: the artistry of the ordinary.
Posted by Captain Future at 7:46 PM