Gardens in the Dunes
by Leslie Marmon Silko.
Simon & Schuster.

This draft is pretty close to the review as published in the Winter 2000 issue of Orion.  My review of a more recent book by Silko is here. 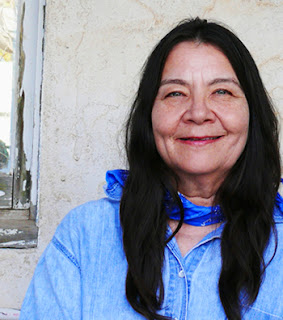 We don’t often knowingly taste the fruits of the famed MacArthur “genius” grants, but in Leslie Marmon Silko’s case we got a work of genius called The Almanac of the Dead, a sinuous, relentlessly apocalyptic epic that projects the past and hidden present into a plausible near future. Published in 1991, it may someday be known as the great American novel of the 21st century. A generative chapter in that book concerns an ecstatic lawyer’s exegesis on the continuing slow-motion unfolding of the prophesy of the Ghost Dance: the overturning of the American earth, returning the landscape Indians knew, with the buffalo and without Europeans. In this revised vision, the whites kill themselves off, though not without first inflicting great pain on everyone and everything else.

Set at the end of the 19th century, Silko’s new novel begins with an actual Ghost Dance, which is abruptly ended when soldiers scatter the dancers like seeds. So begins the themes of cross-pollination, of Indigenous beliefs about the earth that both transcend and link places and times, and of an inexorable return to the Indigenous world, that root this novel. 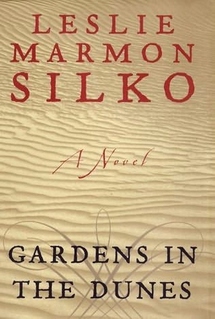 Shorter and less overtly violent than “Almanac”, the style of this novel suggests a range of 19th century storytelling from Austen to James and Twain, with Tolstoy-style internal monologues. There are apocalyptic strains here too, but they coexist with a foregrounding of complex individuals, common humanity and an implied kinship among ancient peoples, gently unfolded in the language of gardens and flowers.

As Loren Eiseley eloquently elucidates, the emergence of flowering plants an evolutionary eyeblink ago changed the face of the planet. Thanks to wispy, air-blown attachments, hooks to grasp the fur of passing animals, sweet berries and fruits and honey to transport the seeds and put pollen in the bellies of the birds and the bees: “Plants traveled as they had never traveled before. They got into strange environments...”

Such are the travels of Indigo, a girl of the Sand Lizard people of high desert California, a small band of Native holdouts from the reservations. From the center of her world, her grandmother’s gardens in the dunes, Indigo is blown by the winds of fate to strange environments east across the United States, to England and Italy.

These travels begin when, on the run, Indigo suddenly appears in the garden of Hattie, an upper middle class woman who is struggling to reconcile her Victorian life with her fitfully emancipated mind and spirit. Hattie is recently married to Edward, an Edwardian American whose horticultural skills serve colonialist expansion. His final desperate scheme to make his fortune sets Indigo’s voyages in motion, when Hattie insists on taking her with them on their travels.

Another device flowering plants use as travel agents are humans around the world who express their beliefs and longings in that particular blend of art, nature and technology called the garden. Culture is cultivated, so the trading of seeds, and the flowers that travel because their beauty transports human hearts, are apt metaphors as well as real causes for the cross-fertilizing of human culture. Indigo encounters many gardens, gardeners and the beliefs that give form to both, from the Puritanism molting to become modern Protestant capitalism in a showy blue garden of Long Island, to a secret Celtic garden in England and a series of forest gardens guarding pagan gods in Italy. Indigo carefully collects seeds from each, to plant in her own garden upon her return.

Prepared by her grandmother to accept diversity in plants and people, Indigo reacts with wonder and appreciation but without essentially changing. Why this may be so can be glimpsed in the handling of otherwise picturesque details that illuminate Indigo as a universal little girl who is also of an ancient primal culture-- her relationship with her animal traveling companions, a monkey and a parrot, for instance, and her rapt attention to stories of the Chinese trickster monkey Hattie reads her (perhaps a nod to fellow novelist Maxine Hong Kingston?), and tales of King Arthur told to her that are more fabulous than the versions we usually see.

Meanwhile, her older sister (Sister Salt) is having her own vividly narrated Wild West adventures. When the sisters reunite and their stories become one, the riveting and evocative final chapters are as unexpected and inevitable as reality, as metaphorically rich as the best literature, and true to Silko’s particular Native perspective as she has previously expressed it. 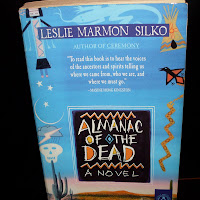 Since European writing has long associated Native Americans with the myth of the Garden, there’s irony as well as genius in exposing the root beliefs and humanity of Europeans and non-Native Americans through their gardens. But this recognition is definitely on Native terms. Though Silko’s political subtexts and cultural contrasts are unmistakable, they emerge from fully drawn characters in historical context, whose individuality and hearts are heartbreakingly (and humorously) expressed.

In the 19th century novel tradition, this one is also full of garden lore and the textures of bygone landscapes. With this rich tale full of life, feeling and humor, Silko uses the by now hybrid flower of the novel to create a delightful and artful garden of American history and human relationships with nature. But it is after all a garden being discussed in Shakespeare’s “A Winter’s Tale” when Polixenes says, “The art itself is Nature.”
Posted by Captain Future at 9:54 PM