This is the first of three book reviews of books by Native authors that I wrote and published, but that seem to be unavailable elsewhere.  A somewhat (but importantly) different version of this one was published in the Winter 1999 issue of Orion magazine.  I started collecting these pieces with Native subjects on this site several weeks ago, and it so happens that I'm posting these on Columbus Day.  What a kowincidence.  These were among my first reviews of books by Native authors and on Native subjects, and the first two in particular contain appreciations more generally for the literature being written by Native authors.

I continue to review books by Native authors and on Native subjects, for the San Francisco Chronicle and the North Coast Journal, for instance.  The most recent ones can be found here at my books blog, Books in Heat.

Linda Hogan is a personal favorite and I believe she deserves more recognition.  Her novels previous to this one--which I loved--were Mean Spirit and Solar Storms.  She's also published short stories, poetry, memoir and nonfiction, as well as People of the Whale: A Novel. 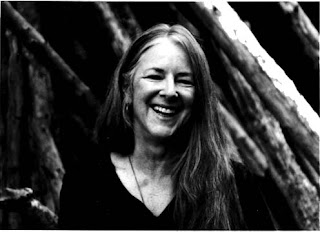 By now it has dawned on some purveyors of deep ecology, sustainability, biodiversity, biophilia and the “New Paradigm” that these concepts were operating principles in the Americas for thousands of years before Europeans destroyed the peoples and cultures that practiced them. But there is still little exploration into what Native activist Chris Peters calls the Native Paradigm. Derived from thoughtful observation and experience in direct and complex relationship with the natural world, it is embodied in culture and traditional knowledge, and expressed and applied by Native intellectuals and elders. It seems likely that our natural environment cannot be saved without significant movement towards understanding it.

To the dominant culture, the Native worldview is still alien, even though it has always been here. What are we still missing of crucial value? Fortunately, we now have a vital and growing contemporary Native literature, which includes fiction of high literary art as well as authenticity. It provides perhaps the most accessible and organic way to begin to understand the Native point of view, well beyond anthropological descriptions, New Age sentimentality, eco-speak analysis and doctored quotes of Chief Seattle. In poetry and fiction—particularly in novels by Native authors--it includes emotional, moral, psychological and even physical communication as well as models for the mind, in a form that’s become universal. And there’s nothing like a good story. 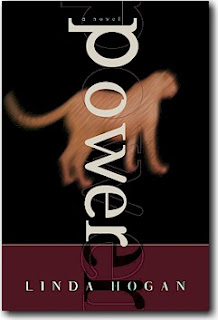 The clash of cultures and world views is dramatized in Power, Linda Hogan’s novel set in the swamplands of contemporary Florida. This clash is the vital dilemma in the coming of age of the book’s narrator, a 16 year old member of the fictional Taiga people, who lives with her family in the non-Native working class town, but is drawn to an old Taiga woman and her solitary life at the edge of the dwindling wild. It comes to crisis after a powerful storm, when the older woman, Ama, takes her on a brief but evocative hunt and kill of an officially endangered Florida panther.

The theme of doubleness is a preoccupying undercurrent in the girl’s life and thoughts, beginning with her name: at home she is Sissy, but her Taiga name is Omshito, which means the one who watches. What she sees is two worlds, represented by the non-Native dominated town and the last remote Native sanctuary in the woods beyond the swamp, mirroring also the two worlds of transcendent and visible reality, with cracks and openings (and also doors closing) between them.

Some characters live in one or the other world, Ama lives between them, but everyone is somehow divided. Of the panther killing (and the resulting two trials, by the county court and tribal elders) Omishoto is of two minds, seeing two truths which contradict each other, and two sides which are both wrong and both right.

There is a doubleness to power as well. The vividly described hurricane is the ultimate power of primal nature, but nature is also a victim of human power In fact, the few surviving panthers are all diseased and starving. They are often killed by cars and sometimes choked by the tracking collars placed on them by state biologists. The dramatic panther hunt includes crossing a highway, and takes place in wooded and swampy strips with houses so near that Omshito hears a radio playing. She can still fish for bass, but they are too poisoned to eat. The spring which the Spanish once believed was the Fountain of Youth is so polluted no one can drink from it. 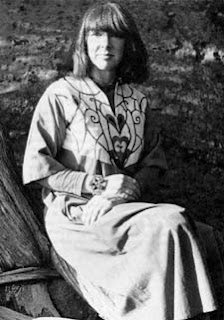 Omshito is also aware that the Taiga people are as few and as endangered as the panthers themselves, and that like the panthers, they are valued only as mascots while considered inconvenient and dangerous in the modern world, while the wild world that sustained them both is inexorably destroyed. The Taiga, and Ama in particular, strongly identify themselves with the panther, who their stories say taught them the mysteries of life. The meaning of the panther kill cannot be separated from the clash of Native and modern worlds, and defies the oversimplifications of reflexive condemnation.

The doubleness extends to double meanings and ambiguity, a powerful if recently neglected tool of poetry, and also in Hogan’s hands the means to express a Native experience of reality. From the start, Omshito sees not just the ground-level world, but the mastadon bones and remnants of ancient seabeds below, and the forces that gather the clouds. Her here and now is inhabited by the cycles of time that brings past and future into the present. When Omshito says “the earth was bleeding” it is an observation of a sky reddening from the horizon, but also a literal description of a wounded being. Hogan is fleshing the bones of such often quoted and little understood concepts as “Everything is alive.”

Implications of the earth as sacred are also explored, including a Native meaning to the fall from Paradise, and the story finally involves the most primal human mysteries, largely absent from contemporary fiction, such as the meanings of sacrifice and scapegoats, redemption and salvation.

The artistry of this relatively short novel is monumental. There is enough action and social relevance for several movies, yet there is mesmerizing moment-by-moment description in a classic adolescent coming to awareness story. Though the story is clearly and beautifully told, nothing here is simple or completely resolved. There are surprising plot turns and paradoxes, and even minor characters are more than one dimensional. Hogan’s writing is sensate, lyrical and at times hypnotic. Omishot’s voice is at once oracular and realistic and wholly likeable.

There is enough action and social relevance for several movies, yet there is mesmerizing moment-by-moment description within a classic adolescent coming-of-age framework, as Omishto moves towards her destiny. Characters are complex and deftly drawn; Omishto’s voice is at once oracular and realistic and wholly likable. Though the story is clearly and beautifully told, nothing here is simple, there are surprising plot turns and paradoxes, and mysteries powerfully remain. Hogan’s writing is sensate, lyrical and at times hypnotic.

All of this makes Power (along with Hogan’s very different previous novels) not only a multidimensional glimpse of Native life and belief, but a contemporary classic of American literature. A Los Angeles Times review once compared her to Garcia Marquez and Isabelle Alende. She deserves to be routinely mentioned in that company, and that she’s not is yet another comment on the limitations of the dominant culture.

In fact, no list of superior American novelists is complete without the names of Native authors such as N. Scott Momaday, Leslie Marmon Silko, James Welsh, Thomas King, Simon Ortiz, Gerald Vizenour and others, as well as the better-known Louise Erdrich and Sherman Alexie. No knowledge of contemporary America can be complete without the experience of Silko’s apocalyptic epic, Almanac of the Dead. For imaginative power and literary artistry, Linda Hogan is unsurpassed by any living author. Power is a contemporary classic of American literature.
Posted by Captain Future at 10:20 PM