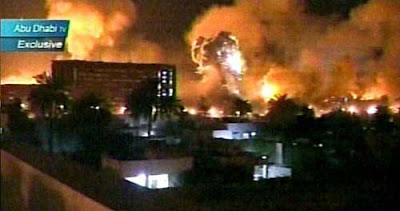 With President Obama about to announce the end of U.S. combat operations in Iraq, it is instructive to remember how all this began, seven years ago. It began with the bombing of Baghdad, a massive American bombing campaign against a civilian population of a country that had not made war on anyone, including the United States. It was one more escalation in the morally indefensible history of bombing, and it presaged everything that's happened since in that part of the world.

In the following piece, published in the San Francisco Chronicle several weeks before the bombing began, I refer to what was a new and little known phrase then, but which has since become a cliched description of this bombing campaign: Shock and Awe. It was supposed to break the will of whoever the Bush administration considered the enemy, but it did not.

I also quoted the famous lines from Shakespeare's Julius Caesar: "Cry 'Havoc' and let slip the dogs of war." I focused on the "havoc" in this piece, but in other writing of the time I emphasized the rest of the quotation. The point of the metaphor of the dogs of war is not only that a pack of dogs are indiscriminately violent but that once loosed, they are very difficult to control or to stop. Once this war started it was clear to some of us at least, that it would go on for a long time. And it has, with immensely and deeply destructive consequences to the U.S. as well as to Iraq. It has eroded us morally, depleted us financially, destroyed thousands of people physically and psychologically, and distorted our politics. We don't seem to have learned much from it either. If for no other reason than the resources of all kinds it stole from facing up to the double challenges of the Climate Crisis, it has deeply wounded the future.

There are going to be attempts to rewrite its history, which will likely be evident in the coming hours and days. But in some measure, its history was written before it started, and some of us saw that, pleading for the dogs of war to be restrained, even as the bombing became inevitable. (The prediction recorded in this piece that the bombing would begin by March 15 was off by only four days. It began March 19.) The following piece concentrated on one element, the bombing, and its moral and historical context.


When Islamic armies were the most powerful in the world, conquerors of Asia Minor and North Africa, and poised at the gates of Europe in the 8th century, Abu Hanifa, founder of a school of law in the city of Baghdad, proposed that the killing, maiming and raping of civilian noncombatants in war be forbidden. It was one of the first attempts to codify some kind of moral and legal restraints on civilized societies engaged in the dangerously uncivilized practice of warfare.

If and when war comes to Iraq, it will likely feature the relentless and perhaps unprecedented bombing of Baghdad. According to CBS News and other sources, the United States is considering implementing a strategy called "Shock and Awe," developed in 1996. The plan could result in at least 300 Tomahawk cruise missiles raining down on Baghdad in just the first day of an aerial campaign - more than were used on all targets in the entire Gulf War. And the plan calls for an equal or greater number on the second day as well, up to 800 total, each capable of carrying 1,000 pounds of explosives. There was no estimate of how many days the bombing would continue.

Although missiles would likely focus on infrastructure including electricity and water supplies, an average of one missile striking a city of 5 million inhabitants every four minutes around the clock could kill and maim thousands of civilians.

"There will not be a safe place in Baghdad," according to an unnamed Pentagon official quoted by CBS. "The sheer size of this has never been seen before, never been contemplated before."

The prospect of war in Iraq is crowded with moral as well as political questions, with multiple possibilities for ethical outrages of stunning proportions. But the continuous bombing of a city of civilians would probably be the first that confronts the watching world.

In A History of Bombing (published by New Press in 2001, and forthcoming this spring in paperback), Sven Lindqvist follows three main threads: the technology and use of aerial bombing in history, the attempts to deal with the moral implications of its use against civilian populations (Abu Hanifa is one example he cites), and social attitudes toward bombing found in sources such as popular fiction.

The historical parallels to the current prospect as well as the ironies are disquieting. The impact of the "shock and awe" strategy is meant to be on hearts and minds: to destroy the enemy's will, and mental and psychological ability to resist. But bombing's ability to terrorize - the sudden explosive death from the sky without warning - was one of the first effects to be observed, noted in 13th century China. It has often been a prime strategy of bombing, according to Lindquist, used extensively by European colonial powers in Africa, India and Asia.

Bombing is especially terrifying when used on the helpless. At first it was shelling from ships far offshore (which is how the United States bombed Nicaragua in 1854), then bombs dropped from airplanes. Bombing was a cost-effective way of keeping subjugated populations in line. Baghdad was a British target more than once in the 1920s.

As airplanes, bombs and cities all got bigger, moralists and diplomats negotiating the international rules of war and definitions of war crimes struggled to keep up. Several prohibitions against air warfare and the bombing of cities were proposed, and some were signed, except by the major powers capable of the bombing. Well into the 20th century, bombing was considered not so bad if the victims were of "inferior races." Some authors wrote glowingly of bombing as a way to civilize the world by permanently subjugating or even wiping out these races.

European bombing gradually got closer and closer to home, until the German military on behalf of Franco tested new kinds of bombs by dropping them on cities in Spain. Japan bombed civilian cities in China. Then in the 1940s, bombing of even the capital cities of combatant nations - Berlin, London, Tokyo - became a normal instrument of warfare, finally leading to the annihilation of the undefended cities of Hamburg and Dresden by British saturation firebombing, and of Hiroshima and much of Nagasaki by the U.S. atomic bomb.
By that time, terror was not the only result of bombing. Fifty thousand civilians were killed in a single night in Hamburg, most of them women, children and elderly. Twice that number died in Dresden. Two atom bombs did fill Japan with shock and awe, and killed several hundred thousand civilians in the process.

There are various strategic arguments for bombing campaigns that dovetail with apparent moral concerns, usually involving shortening a war's duration or substituting for ground assaults, thus saving lives, especially the lives of the side doing the bombing.

When facing the possibility that this war would unleash chemical, biological or nuclear weapons that have been largely absent from warfare for decades due to international taboos of one kind or another, it may seem quixotic to argue that bombing of civilian populations should be regarded as an evil in itself, and beyond the pale for nations that desire any sort of international relations. But it seems morally obtuse that there is a stronger taboo against assassinating a declared enemy's head of a state than against slaughtering babies in their beds. Surely bombing should be a last resort, not the first.

For even if the historical parallels are coincidental and not disturbing echoes of residual racism and empire-building, the bombing of Baghdad to begin this war would have a terrorizing effect on more than its residents. In Shakespeare's time, there was another word for the terror, the shock and awe that accompany a war without moral limits. The word was "havoc," as in the famous quotation from Julius Caesar, "Cry 'Havoc', and let slip the dogs of war."

The bombing and havoc may already be starting by the time you read these words, although according to Los Angeles Times reporter Doyle McManus on the Washington Week in Review, "You can pretty well mark on your calendar March 15. " It's the date formerly known as the Ides of March.
February 2003
Posted by Captain Future at 10:02 AM