Over at Humboldt State University, an exhibit has just closed called Sing Me Your Story, Dance Me Home: Art and Poetry from Native California.  It was in many ways an outgrowth of the 2002 book The Dirt Is Red Here, published by Heyday Books, which helped develop the exhibit. 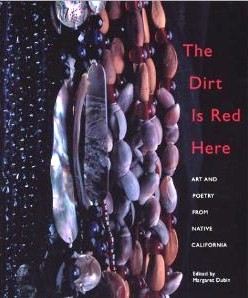 The revival of California Indian cultures, from being close to vanishing to resurging today, is a profound and largely untold story, but now all of us can enjoy this anthology of new art and poetry as a vibrant and revelatory expression of its success.

"The Dirt Is Red Here" is a beautiful book. Color reproductions are appropriately brilliant (Judith Lowry's "The Rescue," Henry Fonseca's "Creation 2001," for example) or delicate (Kathleen Smith's "My People's Home"), and two facing black-and-white photographs ("Lucy Lowry" and "Tuolumne MeWuk Rancheria Roundhouse") by Dugan Aguilar are alone worth the price of a copy.

Editor Margaret Dubin (managing editor of the magazine News from Native California, which printed many of these writers and artists) has arranged texts and illustrations both for visual appeal and as delightful and sometimes subtle comments on one another. Printed on sturdy, glossy paper, this paperback leaves more expensive coffee table tomes in the dust. This is a book to keep and revisit.

There's a dazzling variety of art, from work linked closely to ceremonial origins (the baskets of Linda Yamane, Bradley Marshall's regalia) to the abstract canvases of Fritz Scholder and Parris Butler to the sculpture and installation art of George Blake and James Luna and the mixed media of Jean Lamarr, Brian Tripp and Frank Tuttle. The poetry (and two short prose pieces by Greg Sarris and Darryl Wilson) also demonstrates an impressive range of styles, from the heartfelt narratives of Sylvia Ross to the ritual rhythms of Frank LaPena and Stephen Meadows, and Richard Stewart's haiku inflections. There's a multiplicity of moods even within the work of a single artist or writer, evoking laughter, pain, meditation, mystery, sensuousness and wonder, and together offering an eye-opening journey of rare quality and resonance.

Grounded in cultures that grew here for thousands of years, the contributors of this anthology are also participants -- often as far-flung students and teachers -- in a demanding world dominated by very different premises and attitudes.

The clash is the occasion for the witty commentaries of James Luna's "High- Tech Peace Pipe" and L. Frank Manriquez painting of a pajama-clad Coyote in van Gogh's bedroom. But the complexities of this daily doubleness are also embedded in Janice Gould's meditations on family and being lesbian and in Wendy Rose's description of a "Literary Luncheon: Iowa City," where "I maintain/without willing it/an Indian invisibility."

It's also there in Shaunna Oteka McCovey's succinct satire on a huckster shaman who gives out a "Friends Drum Free" coupon, and in her contrapuntal dialogue on creation stories -- and in nearly every other poem and image in this collection. Even an evocation of nature suggests an aspect, like Deborah Miranda's "The Language of the Prophets," which ends: "Green pines take/ what fog lets go." "Indians evolve like everyone else," Miranda writes in another poem. "Times change. We grow into/ what comes next."

As the late scholar and novelist Michael Dorris noted in his 1995 book, "Paper Trail," there emerged in the 1960s and '70s a sizable "new and maturing generation" of American Indian writers whose "primary language of expression is English, but an English accommodated to the special needs of their individual tribal histories and realities." Their work, he wrote, both expands "the scope of English language composition and criticism" in form, and in content dispelled stereotypes by exhibiting qualities rarely depicted in Indians: "humor, irony, intelligence, and stamina."

In 1994, Greg Sarris edited "The Sounds of Rattles and Clappers" (University of Arizona Press), the first major collection of poems and short fiction by writers with ancestry in indigenous California tribes. The distinction of ancestry, also followed in this anthology, is important, for California is host to more American Indians than any other state, but most come from elsewhere. The varied California landscape fostered 100 or more small tribes that developed complex cultures based on intimate relationships to their particular place, its river or mountain, desert or forest. In this recurrently meaningful sense, their cultures are California.

"The Dirt Is Red Here" includes an informal introduction providing historical context and biographical notes on the artists that tell more of the story. Although they may live in distant cities for a time, many of these artists, from elders to the quite young, return to participate in traditional ceremony as singers, dancers, weavers and regalia-makers, activities that integrate artistic expression with utilitarian and religious purposes.

The work in this anthology could be described as contemporary art and poetry with extra dimensions:: enlivening and enlightening differences from the mainstream drawn from not only complex personal experiences but from traditional cultures that evolved in close affiliation with the land and waters, flora and fauna of the places where we live. Those dimensions, subtle or bold, candid and ironic, found in form and content, combine with familiar elements of shared culture to offer insight into both another point of view and our common humanity. This book is itself a kind of ceremony and celebration. It belongs in the homes and hearts of every Californian.
Posted by Captain Future at 2:49 AM