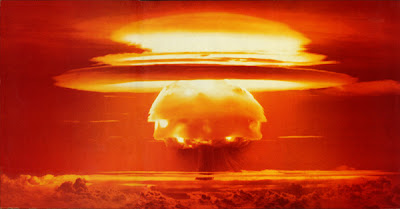 The following piece is from 2003, also published in the San Francisco Chronicle Insight section. In a sense it follows from the previous piece posted here, although that was actually written later. It arose from a sense that using nuclear weapons was again becoming legitimized, particularly by the GW Bush administration, but also by fading memory of what nuclear weapons actually are. What they are not is just bigger bombs, with bigger, more cinematic explosions.

But President Obama has turned that particular tide, at least in terms of official U.S. policy. New nuclear weapons programs have been stopped, and steps have been taken to reduce U.S. weapons and reliance on them. More significantly in light of this piece is President Obama's efforts to institute new international agreements. He negotiated and signed a new START treaty with Russia, and began implementing the U.S. part of the agreement, even lacking Senate confirmation. He convened a meeting of 47 nations that resulted in agreements designed to decrease proliferation and accidental nuclear explosions. His plans include reviving a Comprehensive Test Ban Treaty. These efforts were prominent reasons for his Nobel Peace prize. They also clearly and consciously honor the courageous and ground-breaking efforts of President Kennedy in proposing and successfully completing the Nuclear Test Ban Treaty, and gaining public support to insure its ratification in the Senate.
Still, the tepid reception to Obama's efforts in the U.S., the failure of the Senate to ratify START, and the lack of understanding of either the reality of nuclear weapons or the importance of JFK's achievements, suggest that the fears expressed in the following piece still have substance.

It has been not quite 40 years since the release of Stanley Kubrick's classic film, Dr. Strangelove, or How I Learned to Stop Worrying and Love the Bomb. One conclusion that might be drawn by the widespread indifference to the anniversary of the limited nuclear test ban treaty of 1963 is that we've all learned to stop worrying. We may not love the bomb, but perhaps we're not so frightened of it anymore.

The specter of nuclear war dominated politics, culture and insinuated itself into daily life for decades after Hiroshima. But in recent years it seems to have lost its potency. Although the stories are tucked in back pages or hardly reported at all, the dangers continue to slowly grow.

Israel modified U.S.-made cruise missiles to carry nuclear warheads on submarines, to counter suspected advances in Iran's long-range missiles and the possibility of Iran acquiring nuclear arms. This new element of an atomic arms race in the highly volatile Middle East joins the continuing threat of North Korea to make and even export nuclear weapons, and the continuing danger of two known nuclear powers, Pakistan and India, facing off over disputed territory at their borders.

Few North American news outlets even noted a recently revealed Russian plan to consider using nuclear weapons to fight terrorism, although the mayors of Hiroshima and Nagasaki noticed it, and sent protests to the Russian government. But the U.S. could hardly object, since the Bush administration just pushed through the Senate its plan to develop low-yield nuclear bombs for battlefield use.

A chief reason for today's indifference probably is the belief that the fall of the Soviet Union meant that thermonuclear holocaust is no longer a real possibility. But a recent Rand study asserts that due to disorganization in Russia as well as other factors, the threat of a devastating nuclear exchange between the U.S. and Russia caused by accident or miscalculation has not lessened but increased.

Another reason could be that there hasn't been a visible nuclear bomb detonation in many years, and no atom bomb has been used against an enemy since World War II, resulting in a diminished appreciation for their power. But continued proliferation of weapons in a world where hostility is increasingly open, violent and unrestrained may change that, to our certain horror.

It could also be that because the size and power of conventional weapons has grown (and some are radioactive), while new nuclear weapons seem smaller and more precise, there doesn't seem to be as much difference.

But as California Sen. Dianne Feinstein said recently, "The administration is saying we can make nuclear weapons less deadly, and acceptable to use. Neither is true." According to an article in New Scientist magazine, the United States is exploring an entirely new class of gamma-ray nuclear weapons, which are thousands of times more powerful than chemical weapons and (the article stated) "could trigger the next arms race."

That is the greatest danger, as Feinstein noted: a new nuclear arms race. Which is precisely why it is so important to remember the nuclear test ban treaty four decades ago. It did more than ban the ever-larger nuclear explosions pouring radioactive poison into the atmosphere shared by the whole Earth. It broke the momentum of the arms race, which seemed to be out of human control, propelled by its own deadly logic of inexorably increasing force and counterforce. The Cuban Missile Crisis had sobered the U.S. and Soviet leaders into seriously negotiating a treaty.

What made a crucial difference was President John F. Kennedy's eloquent and persistent attack on the irrational logic of the arms race, and his insistence that humanity begin preparing for peace with the same courage and diligence as it prepares for war.

To those who think peace is unrealistic in a world of conflict, Kennedy countered, in a speech at American University, that this view means "that mankind is doomed, that we are gripped by forces we cannot control. We need not accept that view." Then he used the phrase that more than any other sums up the Kennedy faith: "Our problems are man-made; therefore they can be solved by man."

He advocated an attainable peace "based not on a sudden revolution in human nature but on a gradual evolution in human institutions. ... Genuine peace must be the product of many nations, the sum of many acts. ... For peace is a process, a way of solving problems."

In its most quoted phrases (spoken more recently, without attribution, by a fictional Russian president in Tom Clancy's film The Sum of All Fears) Kennedy said: "For in the final analysis our most basic common link is that we all inhabit this planet. We all breathe the same air. We all cherish our children's future. And we are all mortal." How different these words are than any we have heard recently.

The test ban treaty was negotiated in the midst of the suspicions and fears of the Cold War, just as today's world is permeated with suspicions and fears of terrorism. We desperately need to remember this first step toward peace. The threat of nuclear weapons, of becoming captives of an arms race and a psychology of war, belongs not just to history.
Posted by Captain Future at 11:31 PM