The English Major by Jim Harrison

I read his 1998 novel Coming Home as a culmination of Harrison's writing until then, but he was far from finished.  He published the novels True North (2004) and Returning to Earth (2007); novella collections The Beast God Forgot to Invent (2000) and The Summer He Didn't Die (2005.)  Then came this novel in 2008, which I reviewed for a weekly newspaper on the North Coast of California where I live--hence the emphasis on his protagonist's Eureka revelations--his Eureka! moments in Eureka. 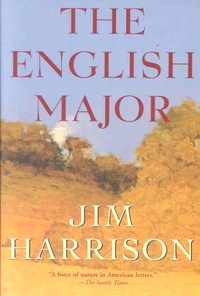 Jim Harrison is known as a master of the novella—his most famous work is probably "Legends of the Fall"—but he’s also written what I regard as an American epic with the 800+ pages of the interlaced novels, Dalva and The Road Home. This new one is an ordinary-sized novel, a first person narration on the comic side. It’s got the eccentric sentences and preoccupations that Harrison fans will recognize: sex, food, memory, siblings, dogs, landscape and the road, but with one more added: age.

At the age of 60, Cliff is hanging on the edge of his old life, his last day on his farm in Michigan that his wife has sold for redevelopment, after divorcing him. Cliff hits the road, immediately hooking up with a hot ex-student from his early teaching days, the fortysomething Maybelle. Good luck, he observes, is a mixed blessing. “Forty-five years of sex fantasies come true and I’m thinking I wish I could go fishing.”

While Cliff takes in landscapes he’s never seen, Maybelle stares at her cell phone searching for a signal. After Maybelle disembarks in Minnesota, Cliff makes his way to the North Coast from Oregon, on his way to visit his gay, show-business son in San Francisco.

It’s in Eureka that at age 60 he sees the Pacific Ocean for the first time. “The Pacific Ocean was more than I bargained for. At first I thought I might have a heart attack…I spent the next day and a half between Eureka and San Francisco hugging the coast as closely as I could and stopping a couple of dozen times for yet another look. The ocean became the best smell of my life.”

As he approached Eureka, Cliff came up with the eccentric project that would eventually center him again: he would rename the 50 states and the birds of America. On the road he struggles to find the self that he’d left behind to become a serious farmer—the nimble-minded English major whose thoughts and feelings weren’t restricted to his fruit trees and birthing cows.  Yet it’s clear from his alienation from the cell phone world, as well as his deep ties to the land and farm animals that he’s also being pulled back.

So will he change his life completely, perhaps devote himself to literary pursuits? Or will he reject change and revert?  Well, there’s no either/or for Cliff, or in this gentle, funny novel that should entertain all readers, but inevitably will have particular meaning for those of Cliff’s age—and Jim Harrison’s.

For awhile, Harrison’s novels were structured as contrapuntal ruminations by at least a couple of characters. This one has but one voice, although the contrapuntal part is furnished by Cliff’s sudden memories versus what he’s actually going through or observing (mostly observing) at the time. The language is a bit simpler, especially in the beginning. This novel does not start well, but once it gets rolling, it takes you along.

The basic style is the same, though. Harrison’s paragraphs are cascades of sentences that apparently have little to do with each other, although appearances can be deceiving.  His protagonists are often more comfortable in an American past that may or may not have existed, and he gives different reasons for this, and for their sometimes formal diction.

In this novel, Cliff is navigating between two women, who both represent troublesome aspects of modern life: besides his cell-addicted, psychobabbling girlfriend, he’s rebounding from his real estate dealing, upper middle class wannabe wife. The conflict between Cliff’s age and his sexual desires and wandering eye provide discomfiting comedy that other oldsters may identify with.

But the poignancy that stays with me comes from scenes like leaning for mutual support against a birthing cow he’s stayed with all night, or the photos he takes on the road, which are exclusively of various kinds of cattle. The sensual world is where Cliff lives, and reconciling it with the abstract demands and irrational insults of modern life seems to me to be the undercurrent common to a lot of his writing.
Posted by Captain Future at 2:38 AM