This review of Brown Dog originally appeared in the San Francisco Chronicle.
In re-reading it, and noting that the first sentence of the Brown Dog saga was “Just before dark at the bottom of the sea I found the Indian,” I now recall that the title of Harrison's 1991 collection of non-fiction was Just Before Dark. 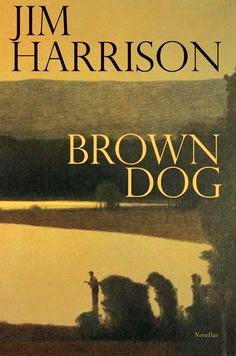 Jim Harrison not only achieved fame with “Legends of the Fall” in 1979, he also revived a fictional form. At about 80 pages, it was longer than a story and shorter than a novel, and therefore an almost extinct species in mainstream fiction called a novella. It appeared in book form with two other novellas, the first of six such Harrison collections.

All of these novellas were stand-alone narratives, with one exception. One tale in each of the five collections after Legends of the Fall was about an increasingly popular character called Brown Dog. Now this volume collects all the Brown Dog novellas plus a new one that carries forward and in some ways caps the series.

Brown Dog fans have been waiting for this, and now they can share with other readers the rare if not unique experience of a chronological narrative written and published over some twenty years.

When Brown Dog first appeared in the collection The Woman Lit By Fireflies in 1990, Harrison suggested to an interviewer that it was his attempt to write something comic for a change.  But after the character’s second tale (in 1994’s Julip) he told other interviewers that there would be at least one more, mentioning both the picaresque tradition and the serial narrative.

The ultimate result is a sequential series of six tales that at a certain point engaged Harrison’s skills as a novelist, so that there are mysteries gradually unraveled (though some remain) and a main character who is not quite the same at the end.

“Just before dark at the bottom of the sea I found the Indian.” With that provocative opening sentence, the first Brown Dog misadventures begin. They involve salvaging a dead Indian in full regalia preserved in the cold deep waters of Lake Superior, and the struggle over ancient burial grounds with some wily and ambitious young anthropologists that drives the narrative through the next novella as well.

Brown Dog—otherwise known as B.D.—is 47 when we meet him. He grew up in the Upper Peninsula of Michigan near an Indian reservation. He still lives nearby. An Indian girl gave him his name because as a lovestruck youth he was always hanging around like a dog. He doesn’t remember his parents and doubts that he is Indian (a question that gradually gets answered) but when a bosomy 24 year-old anthropologist shows up at the local bar, he’s not averse to pretending.

His appetites, particularly for sex, often get him in trouble and lead to numerous episodes of ribaldry, but he is also deeply and happily grounded in the natural world of woods and water. His greatest ambition is to fish as much as possible.

“Westward Ho” finds B.D. on the run from the law with a dubious Indian activist in Hollywood. To this point the novellas are primarily picaresque adventures, suggesting a rural American Tom Jones, or perhaps more appropriately, certain Native American tales about the trickster figures of Coyote or Raven.

But with The Summer He Didn’t Die, the series—and this book—develops narrative direction and urgency, as B.D. tries to save his young stepdaughter, “a woodland creature” with a form of fetal alcohol syndrome, from a sterile state institution.

After further adventures in Canada and Montana, B.D. is back home in the last and previously unpublished tale. A little older and a biological father with a contemporary twist, he feels the need for family and to make peace with his unknown past. At last he learns his parentage, with symmetries on several levels and a connection to at least one other Harrison fiction.

Though a single narrative voice doesn’t emerge until at least a third of the way through the series, there’s no mistaking Harrison’s signature style. His paragraphs are like waterfalls of musically balanced sentences that don’t always relate in obvious ways. Observation, flashes of memory and epigram tumble together to achieve both bursts of illuminating surprise and a kind of mesmerizing momentum.

As a book, Brown Dog is rich in character and incident, rude humor and melancholy. It is both heartfelt and ruefully real. It’s unusual and welcome in the number and variety of characters living on the geographic and economic margins, including educated small town professionals. Whether helplessly cruel or basically goodhearted, they all struggle with the often surpassing power of their impulses.

B.D. himself emerges as a singular character, at once unworldly and self-aware, wounded and grounded, “virtually the opposite of anything the culture thought was acceptable” with a sense of wonder less engaged by billions of stars in the night sky than “the billions of green buds in thousands of acres of trees surrounding him” as he sits motionless on a tree stump in “a state much envied by the ancients.”
Posted by Captain Future at 2:36 AM