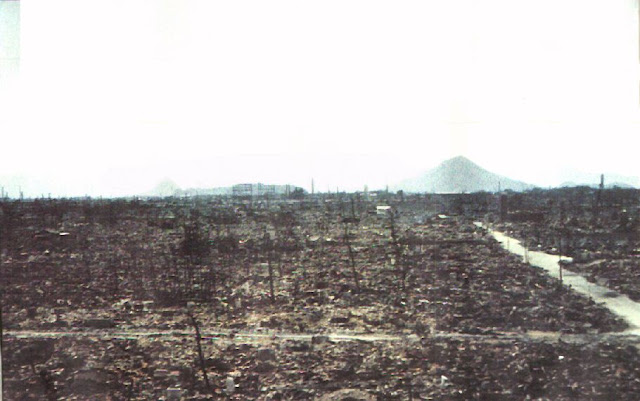 This week in 2015 marks the 70th anniversary of the first atomic bomb dropped on human beings in Hiroshima, Japan.  It is yet another year in which awareness of the danger of nuclear weapons seems to be dangerously waning.  In a few days, I will post a new essay on that.

But that ignorance has recurred for at least a decade, as the end of the Cold War and the dogs of war unleashed by 9-11 continue to encourage that blithe ignorance, that stupid bravado, that sooner or later might well end the human race.  For that danger is just as alive now as at any other time since 1945.

The idea of using nuclear weapons has been raised in 2015 by both Russia and (in veiled language) by US and European allies, all around the time that the Ukraine was a hotspot.  Before then, the last time it was seriously discussed was in 2006, when the Bush administration was caught suggesting that nuclear bunker-buster bombs could be deployed against sites in Iran that were suspected to be gearing up for possibly creating an atomic weapon at some unknown time in the future.

As I write this, the treaty negotiated with Iran by the world's major power to prevent Iran from building a nuclear weapon is being opposed by ranking Republicans and others, some of whom contend that only the destruction of Iran will be sufficient.

The following is a slightly re-ordered essay I wrote in 2006, that was posted at Daily Kos and several other political community blogs.


Return of The Bomb 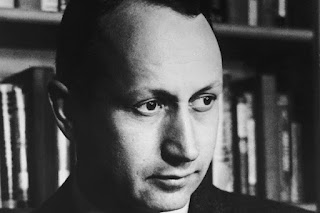 When he read the first detailed reports on the development of the atomic bomb in the same issue of the New York Times that told of that bomb’s first use in destroying Hiroshima, Norman Cousins wrote an essay that would be published within days in the magazine he edited, the Saturday Review of Literature. Though it may sound like a sedate and specialized publication now, it was widely read, with over a half million subscribers. It became a well-known and much discussed essay, especially when Cousins expanded it into a small book, titled Modern Man Is Obsolete.

Cousins advanced several philosophical and political arguments in this essay, but he began with the most vital assertion: the dropping of the bomb meant that humanity had entered an entirely new era. Total destruction of civilization and possibly of humankind, perhaps of most life on earth, was now possible.

This fact had to brought into the consciousness of the species, so humanity could try to take control of its fate. The power of the atomic bomb “must be dramatized and kept in the forefront of public opinion, “ he wrote. “The full dimension of the peril must be seen and recognized.”

But that task was always going to be difficult, as he learned just a year later. Cousins was one of the reporters who witnessed the first postwar atomic bomb test at Bikini island, in the summer of 1946. The bomb was dropped into the ocean, with numerous naval vessels in the vicinity to test the extent of its destructive power. But the observation ship was far away, and the bomb had missed the target so the devastation it caused was not immediately obvious. The first reports to the world gave the impression, Cousins wrote, “that the bomb had been ‘oversold’—that it was ‘merely’ another weapon.”


That bomb had indeed been highly destructive, and the second bomb exploded in this series surprised even the bomb-makers with its ferocious power, sending a half-mile wide column of water a mile into the sky in a single second, and spewing quantities of radiation farther than the military anticipated. But government officials would deny and then minimize the dangers of radiation for years. Even after the hydogen bomb and the era of overkill capacity on hairtrigger alert, what Cousins called the “standardization of catastrophe” became almost patriotic, as the knowledge and the fears were turned inward, to be expressed mostly in low budget science fiction movies featuring giant ants and death-rays from space.

Now [in 2006] it’s been some 15 years since the Soviet Union dissolved, and the threat of thermonuclear war apparently ended, or at least disappeared from national consciousness. Could it be that today some young policymakers again consider “nuclear” to be only a bigger, better bomb? 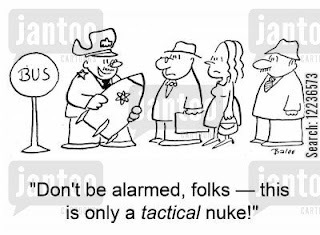 Seymour Hersh suggests that civilians in the Bush administration are pushing the nuclear option for Iran, to the dismay of some of the military. He quotes a former senior intelligence official: “Nuclear planners go through extensive training and learn the technical details of damage and fallout—we’re talking about mushroom clouds, radiation, mass casualties, and contamination over years. This is not an underground nuclear test, where all you see is the earth raised a little bit. These politicians don’t have a clue, and whenever anybody tries to get it out”—remove the nuclear option—“they’re shouted down.”

According to various reports (beginning with Hersh but confirmed by several articles in the Washington Post and elsewhere), the use of tactical nuclear bombs is being considered in order to penetrate underground bunkers in Iran that may house nuclear research sites or command and control centers.

In her strong denunciation of any imminent bombing of Iran, California Senator Dianne Feinstein also condemned the nuclear option: “As a matter of physics, there is no missile casing sufficiently strong to thrust deep enough into concrete or granite to prevent the spewing of radiation,” she wrote in the Los Angeles Times. “Nuclear ‘bunker busters’ would kill tens of thousands, if not hundreds of thousands, of people across the Middle East.This would be a disastrous tragedy. First use of nuclear weapons by the United States should be unthinkable.”

Senator Feinstein has been monitoring the Bush regime’s interest in new nuclear weapons for several years, so she also notes this: “There are some in this administration who have been pushing to make nuclear weapons more "usable." They see nuclear weapons as an extension of conventional weapons. This is pure folly.”

Others are pointing out the nature of this “folly.” The National Academy of Science estimates that a nuclear bomb powerful enough to penetrate a bunker a thousand feet deep (1.2 megatons) would send 300,000 tons of radioactive debris some fifteen miles into the sky.

The Federation of American Scientists "the bombs would penetrate at most only a few metres into rock, causing no reduction in blast, fire, or fallout damage on the surface. The largest would have blown out a crater almost a thousand feet across and thrown a cloud of radioactive fallout tens of thousands of feet into the air where it would be blown hundreds of miles downwind."

Physicians for Social Responsibility calculate that a nuclear attack on Iran of this kind would result in 3 million deaths within 48 hours. Radioactive fallout would reach into Pakistan, India and Afghanistan, exposing some 35 million, including some 20,000 Americans deployed in the war against terror. There would be more fatalities from radiation illnesses as medical and emergency systems fail.

On its website, the Union of Concerned Scientists has an animation which shows the effect of nuclear bunker busters on the bunkers (a single bomb is unlikely to reach the target), the contents of bunkers hit (the bomb could spread biological agents kept in bunkers into the atmosphere) and the spread of blast and radiation to surrounding areas.

The first three atomic bombs of 1945 were all about the same size, between 15 and 20 kilotons. The first bomb, tested in the New Mexico desert, killed every living thing inside a mile. The Hiroshima bomb leveled a city and reduced human beings a half mile from the blast to lumps of charcoal. Five years later, radiation had more than doubled the death toll.

In Nagasaki, a boy playing in the river with friends dove to the bottom to retrieve an object. When he rose to the surface, his friends were blackened corpses, the city around him was in smoking ruins. Again, the number of deaths doubled from radiation.

Though aspects of the U.S. nuclear arsenal are obscure, the nuclear bunker-buster bomb B61-11 (which cannot penetrate to 1,000 feet) has a variable yield of up to 340 kilotons. Though these would not explode high in the air as those bombs did, one such bomb would be the equivalent of 30 Nagasaki bombs, the last nuclear device to be used as a weapon. One of the airmen in the Nagasaki plane described the bright, fiery cloud shooting up with enormous speed as “a living thing, a new species of being” with “many grotesque masks grimacing at the earth.”

For sixty years, humankind has held that monster at bay. Can we now allow it to be unleashed so casually? It seems likely that at the very least, the nation that unleashes it will quickly become the pariah and the shame of the world. It is time we think very seriously about the consequences of opening this ultimate Pandora’s box, and join with others to stop it. The world may have changed on 9-11. But it certainly changed even more radically in August 1945, and we must not forget it.
Posted by Captain Future at 10:33 PM