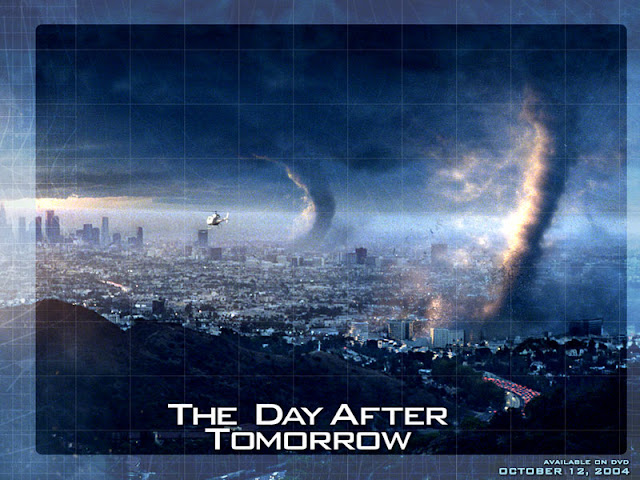 As climate disasters around the world increase in number and awful strangeness in 2012, I keep thinking about the early scenes of the 2004 climate crisis disaster movie, The Day After Tomorrow.  They showed a series of apparently unrelated and decidedly freakish and violent weather events, culminating in a tornado epidemic that smashes through Los Angeles.  By now very similar events have in fact happened in various places.  So far in the U.S. the super-tornadoes that have ripped through and leveled huge areas, including in places that have seen few tornadoes before, have not hit major cities, let alone major media capitals.  But the damage done to Los Angeles in this film may be only a slight exaggeration of what would have happened if, for example, one of these tornado outbreaks had moved on to Washington, D.C., which it easily could have.

This piece appeared in the San Francisco Chronicle Insight section on May 30, 2004.  The intense political polarization on the climate crisis "issue" was well underway, and would only get worse.  But there was some hope that this movie and new documentary films would break the resistance, at least in terms of awareness.  By this summer of 2012--the hottest summer in the hottest year so far recorded, with between a fifth and a third of the U.S. in severe and protracted drought--polls are showing more acceptance of the reality of the climate crisis, and its causes.  But political paralysis remains the rule. 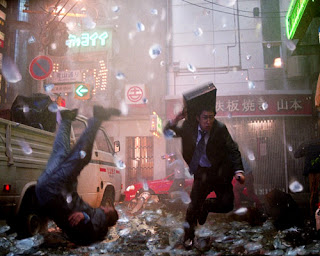 The number of extreme weather events doubles from a decade before: lethal heat waves in Europe, floods in Africa, droughts in Asia and the United States. A record 300 million people flee their homes from natural disasters. Carbon dioxide in the atmosphere hits record level. Warming increases the range and virulence of diseases. Trees die in New England. Glaciers melt faster in Alaska. There's a major influx of freshwater in the North Atlantic and a slowdown of ocean circulation below the Arctic Circle. Antarctic ice flows faster into the ocean.

What could be next? Rising sea levels swamp coastal cities. Famine in Europe. Nuclear wars for water. A million species threatened with extinction. The end of life on Earth as we know it.

Sounds exciting, but these aren't scenes from The Day After Tomorrow, the global warming disaster film that opened this weekend. They're from the real world. Everything in the first two paragraphs has happened or is the statement of a real person (including Sir David King, chief science adviser to the British government). Everything in the third paragraph is science-based speculation.

The movie itself takes huge liberties with known science, in the speed with which global warming brings on a new ice age. The paradoxical possibility of heat leading to ice is real: if cold water from melting glaciers change ocean currents like the Gulf Stream, Manhattan could get colder pretty quickly -- though in a decade, not a New York minute, as The Day After Tomorrow would have it.
But all by itself, heat is already causing problems like drought, crop failures, disease, violent storms -- and is threatening much more as the century proceeds.

Director Roland Emmerich has substituted climate change for the alien threat of his blockbuster Independence Day and the radiation monster of his remake of Godzilla. At first, scientists and environmentalists worried that the film's festival of instant catastrophe might make global warming seem as credible a threat as Van Helsing's vampires, Harry Potter's dementors or this summer's other movie villains. But that's changed, as the Worldwatch Institute and National Resources Defense Council are touting it on their Web sites, and Al Gore spoke at a premiere sponsored by Move-On.org.

Maybe they were all inspired by the Bush administration's attempted muzzling of NASA scientists (who earlier were talking openly about the Ice Age scenario) from responding to questions about the movie. Or maybe it's just that global warming couldn't be taken less seriously in the United States than it is already. While 72 percent of Americans said they were concerned about it in 2000, only 58 percent say so now, and only 15 percent believe it has anything to do with fossil fuel consumption.

Why are we so determined to be oblivious? Perhaps, after the Cold War's thermonuclear threat, and while trying to cope with international terrorism, we're suffering from apocalypse fatigue. Besides, it's hard to get upset about something that sounds so moderate and nice as "global warming." Even the "greenhouse effect" sounds decidedly unthreatening. Who's afraid of a greenhouse? Books continue to be published that contribute solid information, but none has had the simple eloquence or impact of Rachel Carson's Silent Spring, which got DDT banned and jump-started a new kind of environmental awareness. 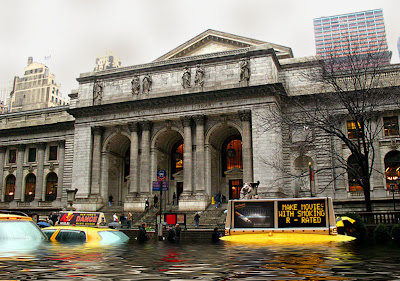 Hence the hopes for this heavily advertised movie. But the highest hurdle to overcome may be the time-lapse nature of the problem. What is newest and most challenging about global warming is that once its effects are clearly apparent, it's too late to stop them. Climate and its effects interact with everything, especially the resources we depend on that are getting scarcer, like fresh water, and oil.

Almost inevitably, many of the changes will be in how we approach life, as individuals and societies. If we get ahead of the curve, these changes will include global cooperation, common commitment, a surge of creativity, community, shared sacrifice and adjustments in values. If we let the crisis overwhelm us, the changes will be just as great but a lot harsher and more destructive.

The climate crisis is the keystone issue of our time. Addressing it means addressing virtually every other significant environmental and energy problem. Maybe The Day After Tomorrow will nudge bigger audiences for greater educational efforts, and for political change. Perhaps it will revive what remains for me the most cogent media treatment of the subject, the 1990 international television production After the Warming. Host James Burke presented a plausible history of global warming from the perspective of a citizen in 2050. His future self compares us today -- in the do-nothing days before the day after tomorrow -- to the man who falls from the top of a tall building. As he passes the 17th floor, someone asks him how he's doing. "So far, so good," he replies.
Posted by Captain Future at 2:14 AM