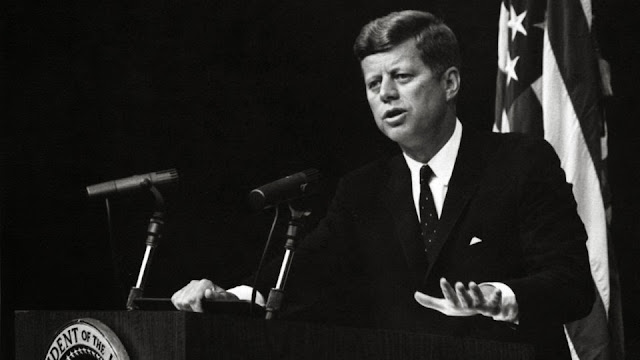 November 22, 1963 was one of the defining days of my lifetime, and of my life.  It was the day that everything changed.

But my suspicion and even despair that the future--and my future-- had turned very bleak coexisted with the sense that I must find a way to carry on what I felt was the Kennedy legacy.  I was 17, a student at Greensburg Central Catholic High School and the following piece was published in the school newspaper, the Centralite.  I probably mentioned the bells of St. Matthew's church in Georgetown partly because it was there, on the Sunday of Inaugural weekend, that I shook hands with President Kennedy--one of the first non-dignitaries to shake his hand as President.  I saw him speak in Pittsburgh little more than a year before his assassination.

The slow cadence of the muffled drums reflected the mournful heartbeat of Washington.  The bells of St. Matthew's were echoed across the nation.  The world heard them, and knew for whom they tolled.  They tolled for the departed President, John F. Kennedy.

When a man and the Presidency meet, profound changes are worked upon both.  John Kennedy brought to his office an immense intellect, a dashing style, a will to serve, a ready wit, an enormous potential, and a courage based on trust in God.

He gave the Presidency heightened prestige, grace and dignity, a foundation of leadership, and a position of strength.

The man who had been described by his queenly wife as "an idealist without illusions" came to the White House with a view that did not permit him to stand and watch the world march by, but demanded that he take an active part in determining its route and its final goals.

He was, as a British commentator described him, "a man so utterly right for the job."  He molded the presidency as a citadel of power in the Cuban crisis.  He provided moral leadership in civil rights and the nuclear test ban treaty.  He set a new intellectual tone for the nation, and dedicated us to the adventure of conquering space.  He showed through action his conviction that "if a free society cannot help the many who are poor, it cannot save the few who are rich."

His work was not done in the first one hundred days, nor in his lifetime.  But he began.

He will be more than a footnote in history.  His spirit will live on, especially in the Peace Corps that he founded.

In his last public speech, he pointed out that the new frontier of which he had so often spoken was not a political program but an existing reality.  For the first time in history, man has the material power to abolish many forms of human suffering and want.  The challenge is to apply our knowledge and resources to the problem.

John Kennedy's message was repeated over and over: "There is great unfinished business in this country."

His death brought an end to his efforts, but not to the problems themselves.  There are still forty-two million Americans--a fourth of the nation--with levels of income, health, housing, and food below standards tolerated by society at large.  There are still millions of unemployed, lacking the skills and education to support their families.  There is still a large segment of our population who are insidiously denied their basic rights because of color.  There are still the old people who suffer sickness three times as often, yet earn half as much, as younger Americans.  There is still one third of a world rocked with poverty, hunger and disease.

The death of John Kennedy does not discharge us from our obligations.  It rededicates us.

"Never send to know for whom the bell tolls; it tolls for thee."
Posted by Captain Future at 10:30 PM