Besides the deafening silence today versus the two million shouting voices forty years ago, this Earth Day has some significant differences from the first. For example, there is 40% less sea ice in the world, and much of what remains is melting. There are 8.5 million square miles more that must deal with a tropical climate; half of Australia and much of the American Southwest are in permanent drought. River water has shrunk by a volume equivalent to the Mississippi. Glaciers worldwide are shrinking, and some are virtually gone.

There are tens of thousands--probably hundreds of thousands--fewer species of life. There are fewer edible fish in the sea, and life there is dying out fast. There is less water in many places on land, and partly as a consequence the world produces 40 million fewer tons of wheat, corn and barley per year. There are more storms, more heat waves, more diseases in more lifeforms, more forest fires and other destruction, not only in the U.S. but in the Amazon. "We're seeing the end of some forests as we know them," says a U.S. forester.

At the foot of a melting glacier in northern Tibet, a young man from a small village there was asked to explain the reason for the change. His answer was neither ethereal or complicated. "Global warming," he said. "Too many factories." A simple and much more than an inconvenient truth.

The Climate Crisis is not some vision of the future--it's been with us these forty years, it's gotten worse, and now it's having effects that only the self-blinded and deluded can deny. But still...we can stop it, right? We may be able to prevent the very worst--runaway climate change in the far future, although what governments around the world are so far willing to do won't be enough. In any case, for the foreseeable future, it's only going to get worse. And then at the very least it is going to stay that way, for thousands of years.

That was the message of David Orr's book, Down to the Wire, last year. This year it is no longer a new message-- not among climate scientists and those who follow their work. It is the starting point for Bill McKibben's new book. We no longer live on the same planet as existed on the first Earth Day. He gives the planet we will be living on from now on a new name: Eaarth. So in a sense, this is the first Eaarth Day. 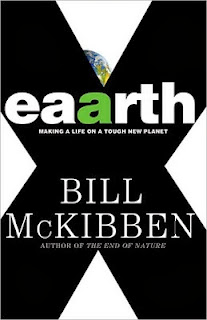 McKibben's book uses only about a quarter of its pages to describe the current situation and trend lines, and another quarter to explain the inadequacy of the proposed responses to the Climate Crisis, and the extreme unlikelihood that large-scale changes in policy, energy generation etc. can be made in time to head off very major changes in how human life on this planet is to be lived. "And if our societies start to tank, we'll be in worse shape than those who came before. For one thing, our crisis is global, so there's no place to flee. For another, most of us don't know how to do very much--in your standard collapse scenario, it's nice to know how to grow wheat."

McKibben comes right up against the logical conclusions, the doomsday scenarios of nuclear wars over oil and water, mass migrations, a dieback of half or 3/4 or more of humanity, leading to the day-to-day life for the survivors imagined for us in a host of grim movies, from Mad Max to The Road.

Instead he backs off, partly because (I imagine) it's as David Orr wrote--if this is indeed the future, there's not much point in writing a book about it. Instead, McKibben writes: "The rest of this book will be devoted to another possibility--that we might choose instead to try to manage our descent. That we might aim for a relatively graceful decline." [Emphasis is his.]

So the second half of the book is about how to do that. It emphasizes local and small-scale solutions--living "lightly, carefully, gracefully." Locally generated clean power, focus on maintenance instead of growth, no more consumer culture or the world it represents. Except for the Internet. Because local utopias are likely to get stifling without contact. "Which is why, if I had my finger on the switch, I'd keep the juice flowing to the Internet even if I had to turn off everything else."

McKibben makes his case for all this being well within the possible, sometimes persuasively ( although I'm dubious about the Internet surviving.) He notes that part of the problem is that "We lack the vocabulary and the metaphors we need for life on a different scale." He offers his "candidates for words that may help us think usefully about the future." They are: durable, sturdy, stable, hardy, robust.

Good words, and useful for the kind of society he foresees. McKibben made a choice in both the language and content of this book: not much philosophy or generalizing, a lot of practical specifics and common sense. But I doubt that this vocabulary is going to be enough. For one thing, there are some slightly higher-order words that will be very important, like courage, compassion, attention, dedication, fairness.

But even beyond that, people need a larger vision, to guide and inspire them. And if it's going to really work, it has to be the right vision. There were good words and visions at the first Earth Day, that helped inspire the effort leading to most of the environmental progress that was institutionalized in the first decade of the environmental movement, and has continued on that momentum. But mostly, environmentalists have been terrible at vision, and especially at "good words."

With the switch from the soft-sounding and not even accurate "greenhouse effect" to the vaguely pleasant sounding "global warming" and "climate change," the response to global heating has especially suffered. As for the titanic struggle ahead between those who want to use resources to stop the cause of global heating to those who insist we can only afford to fix the effects, what environmentalists offer us is the mind-numbing choice of mitigation versus adaptation. Which more or less guarantees that a sensible discussion of these issues won't occur in enough time to have clear policies before the panic and politics combine to drive the situation out of control.

But in the past thirty years there is one word, one concept and one vision that has the proven power to move human souls: Gaia. The sense of our planet as a living organism, prefigured in myth and science, proposed as a hypothesis by James Lovelock and refined by him and others into a real scientific theory, it has also proven to be an inspiration and a possible focus. 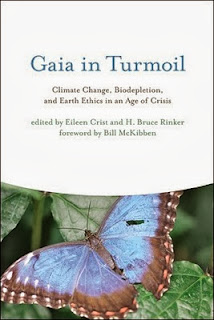 The breadth and depth of what Gaia can mean for the future is brilliantly suggested in the new compendium of essays, (with an introduction, by the way, by Bill McKibben.) This volume includes various views of the science (including its relationship to systems theory and cybernetics),the historical resonance of the ideas, the applications to policy and how people relate to their planet in their moment-to-moment lives.

There are trenchant essays on Gaia and evolution, forest systems, water, biodiversity, and on its relationship to ethics, education and governance. Particularly striking are the essays by Martin Ogle on Gaia as model and metaphor, and David Abram on Gaia and the transformation of personal experience of the everyday world.

I don't think I am exaggerating when I suggest that an entire curriculum could be built around this book, producing a very valuable education for the future. Together with McKibben and Orr--and one other book , A Paradise Built in Hell by Rebecca Solnit (Viking)--I place this at the top of my indispensable Eaarth Day books. Solnit's book explores responses to recent disasters to pose the key questions "Who are you? Who are we? In times of crisis, these are life-and-death questions." This is another component of how we realistically face this tougher future.

Another useful anthology, with an emphasis on social questions regarding future environment, is Human Footprints on the Global Environment: Threats to Sustainability (MIT), edited by E. Rosa, A. Diekmann, T. Dietz and C.C. Jaeger. This volume may be of interest primarily to scholars, professionals and policymakers, but it does indicate the seriousness and sophistication of a growing multi-disciplinary approach to larger scale issues of the onrushing future.

A Reenchanted World: The Quest for a New Kinship with Nature by James William Gibson (Holt), on the other hand, is a marvelous synthesis for the general reader as well as specialists looking for a broader and deeper view. Not as squishy as the title might indicate, it narrates pertinent history and it's a good introduction to classic authors and important if more obscure books that combine the practical with the necessary spiritual dimensions of approaching our relationship to the natural world.

Though these relationships faded in our current built environment, a hotter climate and all that it brings will force humanity to once again confront the power of nature. When humans were closer to nature by necessity--when humanity developed by means of its relationship with the rest of nature--the spiritual dimension was very important. It likely will be again.

Other useful approaches can be found in Living Through the End of Nature by Paul Wapner (MIT) and Treading Softly: Paths to Ecological Order by Thomas Princen (MIT.) Wapner looks at the attempts to master nature through the history of civilization, and proposes practical ways to redress some sort of necessary balance. Princen grapples with the persistent basic issues of economy and ecology, at best using direct language to untangle them. Though that effort isn't always successful, there's enough merit to add it to the Eaarth Day reading list.
Posted by Captain Future at 1:29 AM