March on Washington Then and Now 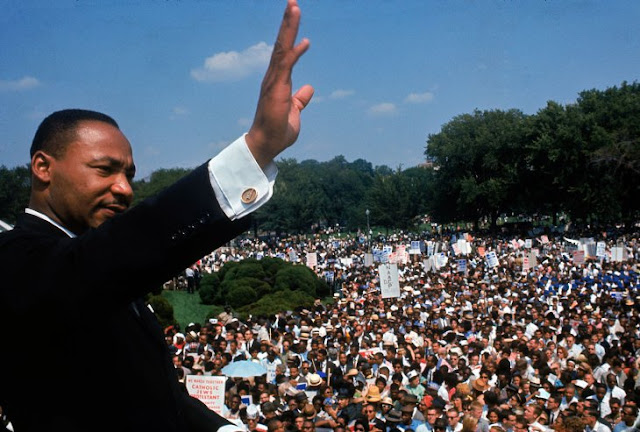 August 28, 2013 was the 50th anniversary of the March on Washington for Jobs and Freedom of 1963.  I am posting here two short pieces I wrote about it--fifty years apart-- from the point of view of a participant.

The more recent piece is available elsewhere on the Internet (at the Pittsburgh Post-Gazette, Arcata Eye and my own Dreaming Up Daily) but I wanted it to be part of this site's archives.  I was 17 when I wrote an account for the Greensburg Catholic Accent which is not otherwise available (except at my Blue Voice site.)  This then will be the first and likely last time they appear together.  President Obama called the March one of the most important events in American history.  It is one of the great privileges of my life to have been part of it.

An Altered State: My March on Washington 1963

I was 17 when I participated in what was officially called the March on Washington for Jobs and Freedom on August 28, 1963. I was a student at a Catholic high school, and heard my own beliefs expressed by President Kennedy in his television address that June: “We are confronted primarily by a moral issue. It is as old as the scriptures and is as clear as the American Constitution.” 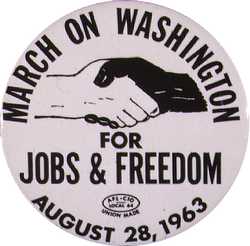 In the weekly newspaper for the Greensburg, Pennsylvania diocese, the Catholic Accent, I read about an organization called the Catholic Interracial Council that was inviting people to go to the March. I contacted the priest who was named and he talked to my parents. He must have been convincing because I got permission to go.

But I got my first indication of just how small this group was going to be when I attended a meeting, and it was two priests and me. A photographer from the Accent snapped our picture as I pretended to paint the already completed banner we would carry.

As it turned out we were the only three people from the diocese to march under that banner. We would meet many other people from the Pittsburgh area, organized by religious groups of various denominations as well as by labor unions and civil rights groups. 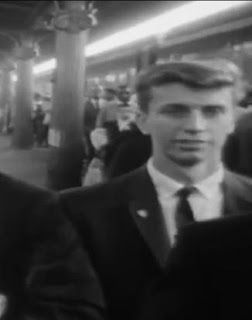 Many traveled to the March from all over the country by bus, and a few by plane, including celebrities from Hollywood and legendary entertainer and activist Josephine Baker from Paris. I boarded a special train from Pittsburgh, one of the twenty or so originating from various places that were added to take people to the March. Recently reviewing video from that day posted on YouTube, I was amazed to see a few frames of my 17 year-old self arriving at Washington’s Union Station (at about the 11:32, 11:33 marks), walking towards the camera and trying to look appropriately serious, in my dark suit, white shirt and tie.

I also looked alert. Vigilance to the possibility of violence was universal that day. From police commissioner Bull Connor unleashing police dogs on demonstrators in Birmingham, Alabama, to the murder of Medgar Evers outside his home in Mississippi, it had been a brutal summer in the South. It’s been estimated that over 14,000 demonstrators across the South (including high school students) were arrested during those months, with at least one death.

When I got home I wrote (in the Catholic Accent) of the “dedicated and dignified fervor” around me at the march. But high spirits were also part of that day’s rhythm. From Union Station to the Lincoln Memorial there was always singing. For me it started even earlier, when I restlessly explored the train, wandering through one quiet car after another until I suddenly pushed open a heavy door to a car literally packed to the rafters with young people. Some were perched in the luggage racks. Several at the far end of the car were playing guitars, and everyone was singing.

The march itself was like one long song. It is more powerful in my memory than the hours of speeches at the reflecting pool. Looking into the faces of the people nearest me, and all of us looking around, my feelings became a reflection of what we felt in common.

We were astonished by our numbers, by the fact of us all there, of the reality that was completely new. The overwhelming mood was wonder. It was a sustained altered state, a living dream. 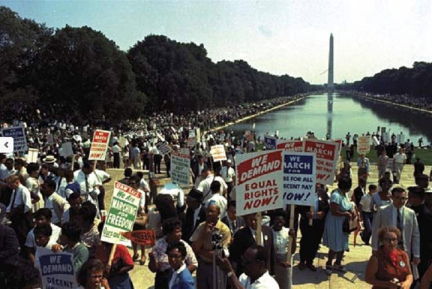 We had a sense of unanticipated numbers on the march, but the dimensions of the day weren’t clear until we got to the reflecting pool. So many people (since settled at 250,000, the largest demonstration in U.S. history to that date) and yet the transfixing feeling of peace—I don’t think anyone had foreseen this.

I saw the joy and wonder and the tears as black people of different ages and from different parts of the country saw each other there. I was also aware that in this context they could see a young white face undistorted by hate or contempt.

We’d marched and sung together, but even as an audience for the program at the Lincoln Memorial, the interactions didn’t stop-- interactions that in the mid-1960s were still rare. 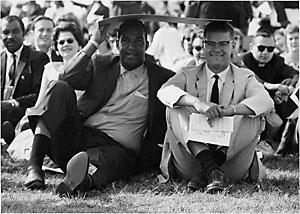 Now we stood in line together at portable water fountains and toilets. We bunched and sprawled on the grass together, sweating under the same steamy sun, both drowsy and responsive to the inspiring words and music coming through the not always comprehensible fuzz of the sound system. We felt careful courtesy becoming a release into a common regard. We looked at each other.

“And when this happens, when we allow freedom to ring... from every state and every city, we will be able to speed up that day when all of God's children, black men and white men, Jews and Gentiles, Protestants and Catholics, will be able to join hands and sing in the words of the old Negro spiritual, ‘Free at last! free at last! thank God Almighty, we are free at last!’"

He spoke of a dream that he saw reflected in the water in front of him. 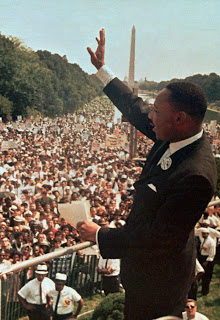 The official intent of the March was to support passage of the Civil Rights bill that President Kennedy sent to Congress a few days after his June speech. Immediately afterwards I recall commentary in the press calling it a failure because that bill was stalled in Congress (it would pass in early 1964.) Today the march is better remembered than the political reason for it.

Race has still not been erased as deep separation, nor has full racial justice been achieved. But fifty years after that day, my memories aren’t of politics or even history. They are physical. They are of a future glimpsed by being lived.


[The following was published in the Greensburg Catholic Accent weekly in September 1963.  The "favorite folk group" mentioned was Peter, Paul & Mary, singing their then-current hit "Blowin' in the Wind" by Bob Dylan.  With the audacity of my youth, I had proposed to write several articles on the March, but the editor thought the one would be sufficient.  Perhaps I would have gotten around to Martin Luther King's speech in the next one.] 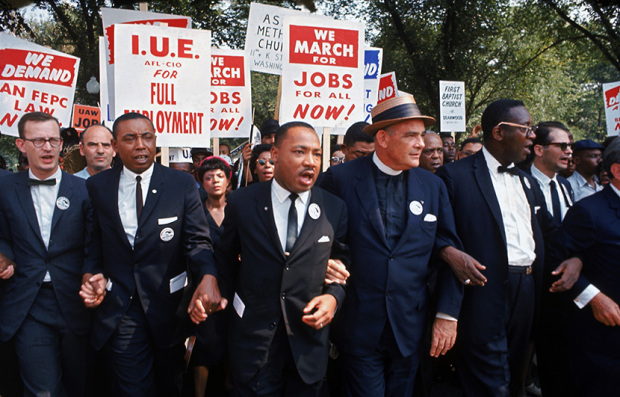 Eyes of Youth
student gives his views on march
by Bill Kowinski
senior, Greensburg Central Catholic
The big shock came to us when we returned home. After all the hours of standing, walking, riding, and marching: after seeing huge masses of dedicated and self-sacrificing people; after hearing the songs and speeches crying for freedom, we were vastly surprised to hear the dispassionate estimates of our effectiveness. The consensus seemed to be that we did little, of any, real good.

Most of these opinions were in reference to civil rights legislation, but to the young people this was not the real issue. The legislation will inevitably come, and it is for future generations to make it work, and to promote the true social integration of the races.

Is this impossible? Had there not been a march, there would be grave doubts about the practicality of realizing this American ideal.

But today, after the march, there can be no doubt. When a mass of people roughly equivalent to the population of Syracuse, comprised of different backgrounds, religions, races, and coming from different regions, could converge on Washington with such dedicated and dignified fervor as to make thoughts of violence absurd, then hope for the future is supremely justified. 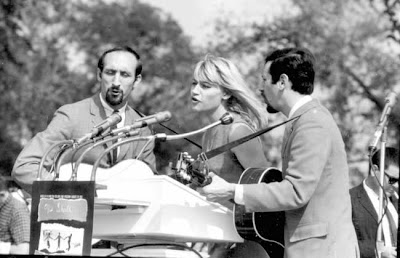 It all held special meaning to the young people. They had come from many places, and for many reasons. Perhaps their thoughts were best expressed by a favorite folk singing group who sang these lyrics from a popular song at the march: "How many years can some people exist before they're allowed to be free? How many times can a man turn his head and pretend that he just doesn't see?"

From the singing on the Freedom Train, to the slow chant of the Battle Hymn of the Republic, the young people brought spirit and compassion to a cause in which they deeply felt.

While all the banners for "Freedom Now!" will have to be satisfied by the present generation, the young people of today will also face a great task.  As John Stuart Mill wrote: "I refuse to congratulate a man or a generation on getting rid of prejudices until I see what is substituted in lieu of them." Prejudice is based mainly on ignorance. It was evident to the marchers that once the races begin to live and work together, as we marched together, meaningful integration can be achieved. It will fall upon the shoulders of the young people of today to see it through.
Posted by Captain Future at 12:35 AM